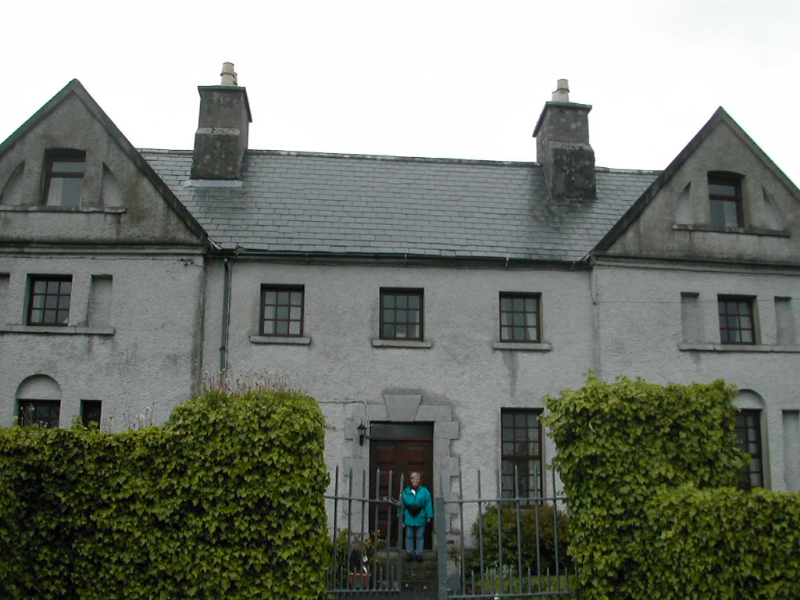 Called ahead for a B&B in Sligo. Our first choice couldn’t take us because they had a wedding scheduled, so we’ll cross our fingers that our second choice, which could take us, will be of interest. It has an odd name, Primrose Grange House, but was built in 1723 and situated partway up a mountain, so that sounds promising. . . .

In spite of the road signs being placed in impossible locations to read, Bob found his way through the downtown of rainy Sligo and out to our B&B like a homing pigeon. He said it was easy: “Just drive toward the water and then turn toward the mountain.” Easier said than done during a rainstorm while driving on the left side of the road through a city, dodging lots of people and vehicles. Very impressive. We found the B&B, but had several hours to kill before our hostess was scheduled to return from teaching school, so we spent some time locating the entrance to a trail up the mountain behind the B&B.

However, it was still raining, so we reversed course and went down to the waterfront and into Kelly’s Pub. Wise move. Even though it was only 3:45 and the pubs don’t open for the evening until 4, they let us in. They had a lovely wood and coal fire burning and the place was dark and cozy. I loved the wood-and-stone floor. While his employee sat at the bar reading a newspaper and smoking, the proprietor, Mick Kelly, proceeded to chat amiably with us for the next hour and a half. . . .

Finally, we drove back to Primrose Grange House and met Mrs. Maisie Carter, who was delightful and welcoming. We both decided instantly that we wanted to stay here two nights and Maisie said that was fine. It was still raining, but since we had a bit of daylight left, we immediately left the house and hiked up Knocknarea (pronounced knock-na-ray’) Mountain behind it over a rock-studded path heading up past sheep and cattle in their stone-walled pastures. We also passed a farmer and his dog coming back from tending the livestock.

At the top was a cairn about fifty feet tall and one hundred feet in diameter, and we even climbed to the top of that. The cairn is supposed to contain the grave of Queen Maeve—known as Queen Mab in England and Wales—a legendary first-century warrior. While we were on top, it was raining and sleeting and the wind was blowing about sixty miles per hour. Wild and exhilarating spot.

Naturally, we were soaked by the time we returned to the house a little over an hour later, shortly after 8 P.M. After changing out of our wet clothes, we now are in the sitting room awaiting tea and being warmed by the electric fire.

After a few minutes, Maisie arrived with the tea, which was accompanied by drop scones she had just made, complete with homemade black currant jam. She insisted we eat the scones while they were hot and we gladly complied. Eating here is going to be fun.

At last we’ve found the place we want to be in Ireland. Bob can hardly wait to scramble back up the hill tomorrow and I don’t know where to start on determining which sights to see around the area. I don’t even know whether I can bear to leave this house, which was used as a girls’ boarding school until 1906. It’s a huge stone building with walls about fifteen inches thick. We are staying in the Headmaster’s Room and halls and rooms seem to lead off all over the place. It is utterly charming. . . .

On to the Lough Gill circuit, following the “Yeats Country” signs. As we started around Lough Gill, we both heard the sound of the legendary bell of the Sligo Abbey (audible only to those without sin). We climbed Dooney Rock to check out Yeats’ inspiration for “The Fiddler of Dooney.” It was in a beautiful wooded area overlooking the lough, reached by a path rather obscurely marked, as usual. We now believe Yeats was inspired to write poetry primarily so he wouldn’t have to go out in the rain to work.

Next we drove to the out-of-the-way viewpoint overlooking “the lake isle of Innisfree,” made famous by Yeats. While I was contemplating the beautiful solitude necessary to compose literature, Bob spotted and trailed a fallow deer hiding in the trees. . .

The rain seemed to have stopped by 3 P.M. so we tried Carrowmore again. It’s the largest megalithic cemetery in Ireland. Of course, we toured it in the rain, which started as soon as we got close to the place. It took a while to find the various burial sites because there are no signs covering the thirty or so areas of interest spread over a few fields and even on the other side of the road. Like Newgrange, some of them dated back to 5000 B.C. We shared the sites with a busload of German tourists briefly (but not happily). After they left, we shared the fields more peacefully with four horses grazing around the stones. . . .

Bob was awake very early, but didn’t go for a walk because—surprise!—it was raining again. I slept in until 8:10, so I had to scramble for breakfast by 8:30. I wasn’t going to miss round two of Maisie’s cooking. Same food as yesterday except I added half a banana, hard as it is to believe. More fun conversation with Maisie before we left. I kept wanting to interview her for an article, but several others have already beaten me to it, and she herself plans to write a book about this house someday. Right now she is a little busy teaching home economics for kids age twelve to eighteen in Sligo and running this house and B&B. Business has been off recently with the proliferation of such accommodations, and we were the only ones staying here Thursday and Friday. On the dining room wall are a couple of newspaper articles about the B&B, including one from the Travel section of the October 4, 1951, New York Times. Maisie said that she started having people show up to stay within a week of that article’s publication.

She and her husband moved into the house, which was basically in ruins at that time, forty years ago May 13. At that time, a sycamore tree was growing up through the floor, and on the second story, the ceiling and the floors were much closer together than they were supposed to be. They started working on the house, first renovating one guest room and then another. The house now has a total of twenty-two rooms, if you count all the bathrooms they added over the years, with six rooms for rent. They brought up their four children here, two girls and two boys, but only one of the sons is still living in the area. In fact, he and wife and kids live right in the house and still run short-horn cattle on the land, while Maisie and her husband Ed (whom we never met) are supposed to be in charge of the B&B. Maisie told us that Ed was always out on the property though. She pointed out that after all these years of work, she and her family are still living in the part of the house with the sign on the door: “Kitchen and Servants’ Quarters.”

We could have talked to her all day, but she had bread in the oven out back and we needed to get to Dublin, so we said good-bye at last. I’m sad to leave this place and particularly its warm-hearted owner.

Notice: Undefined variable: attachments in /home/elizabethcmain/public_html/wp-content/plugins/sociable/includes/sociable_output.php on line 139
Mystery at Midnight© by Elizabeth C. Main “‘Fraidy cat, ‘fraidy cat!”  Sam danced around the kitchen table, keeping out of his sister’s range.  “Want me to look under your bed and chase out the ghosts, Read more…

Notice: Undefined variable: attachments in /home/elizabethcmain/public_html/wp-content/plugins/sociable/includes/sociable_output.php on line 139
A roaring fire consumed our isolated house on Dec. 21, 1972, and caused my most memorable—if not exactly my favorite—Christmas. Awakened in the night by the barking of our dog, my husband Bob and I Read more…

Notice: Undefined variable: attachments in /home/elizabethcmain/public_html/wp-content/plugins/sociable/includes/sociable_output.php on line 139
PATSY’S QUAIL I take solace from their competence As they scurry around her grave, Nurses tending a bedside. They chitter and consult, Grey uniforms plumed and neat, Feet tracking the fresh dirt. They run busily Read more…